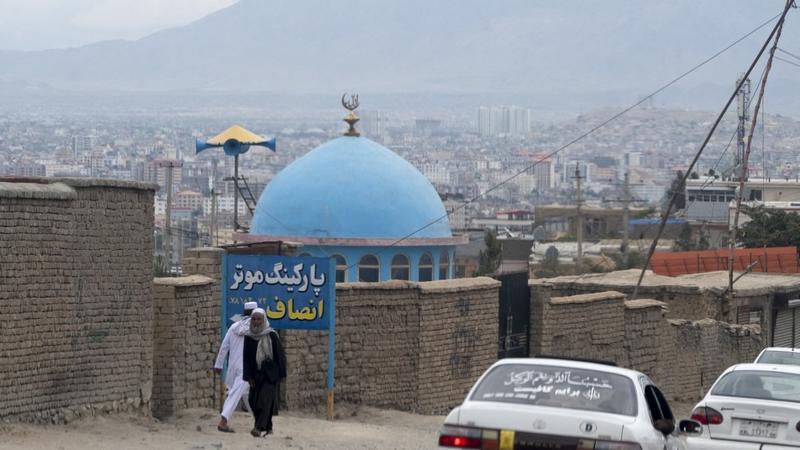 Afghan men walk past the blue dome of a mosque in the outskirts of Kabul on Aug 18, 2022. (WAKIL KOHSAR / AFP) KABUL – A blast tore though a religious school during prayer time in the northern Afghan province of Samangan on Wednesday, killing 15 people, a provincial spokesperson said. At least 20 people […] A health worker sprays sanitizer outside a house as a precautionary measure against the bird flu in Sola area, on the outskirts of Ahmedabad on March 5, 2021. (SAM PANTHAKY / AFP) NEW DELHI – Bird flu and African swine flu outbreaks have been reported in India's southern state of Kerala, officials said Friday. While […] A woman wearing a face mask passes by posters about precautions against the COVID-19 illness on a street in Seoul, South Korea, March 10, 2020. (AHN YOUNG-JOON / AP) SEOUL / MANILA / SINGAPORE – South Korea recorded 51,874 new COVID-19 cases as of midnight Thursday compared to 24 hours ago, bringing the total number of […] People wearing face masks shop at a mall in Yokohama, near Tokyo, June 23, 2020. (KOJI SASAHARA / FILE / AP) TOKYO / SEOUL / MANILA – Japan's government is planning to waive tourist visa requirements from some countries as part of a further easing of border controls enacted to stop the spread of COVID-19, Fuji […] This image provided by the National Institute of Allergy and Infectious Diseases shows a colorized transmission electron micrograph of monkeypox particles (red) found within an infected cell (blue), cultured in the laboratory that was captured and color-enhanced at the NIAID Integrated Research Facility in Fort Detrick, Maryland. (NIAID VIA AP) CANBERRA – The Australian government […] Passengers wait for transportation outside the arrival hall of Noi Bai International Airport in Hanoi on March 15, 2022, as Vietnam announced the return of a visa exemption policy for 13 countries in an effort to kickstart its tourism sector. (NHAC NGUYEN / AFP) HANOI / SUVA / YANGON / SINGAPORE / SEOUL / BANDAR SERI BEGAWAN […] An elderly resident arrives to get tested at a temporary swab centre set up at the void deck area on the ground floor of a public housing block, after a few positive COVID-19 cases were detected in the building, in Singapore on May 21, 2021. (ROSLAN RAHMAN / AFP) SUVA / BAGHDAD / ISLAMABAD / […]

A military health worker shows a Sinovac COVID-19 vaccine vial during the vaccination of military personnel at the army headquarters in Manila on March 2, 2021. (PHOTO / AFP) AMMAN / BEIRUT / JERUSELAM – Israel hopes to become the first country to mutually recognize the inoculation of COVID-19 vaccines with China, according to the […]

A nurse fills a syringe with the Pfizer-BioNTech COVID-19 vaccine at a vaccination centre in Seoul on Feb 27, 2021. (PHOTO / AFP) BEIRUT / BAGHDAD / DOHA – Thailand moved a step closer to issuing vaccine certificates, with a panel of officials backing the proposal seen as a major milestone toward allowing the tourism-reliant […]

A health worker administers a dose of the Pfizer-BioNtech COVID-19 vaccine on a man at the Clalit Health Services in the Palestinian neighbourhood of Beit Hanina, in the Israeli-annexed east Jerusalem on March 2, 2021. (AHMAD GHARABLI / AFP) DHAKA / BANDAR SERI BEGAWAN / TOKYO / KUALA LUMPUR / DUBAI / MANILA / ANKARA […]

An Iranian health worker prepares a dose of the COVID-19 vaccine as the country launches its inoculation campain, at the Imam Khomeini hospital in the capital Tehran, on Feb 9, 2021. (ATTA KENARE / AFP) KABUL / JERUSALEM /  BEIRUT / KUWAIT CITY – Iran recorded 108 deaths from coronavirus in the last 24 hours, the […]

Since the outbreak of the novel coronavirus, the Indian government has not been able to contain the situation and cumulative total of confirmed cases crossed a ten million threshold, there are nearly 160,000 confirmed cases at present, while cumulative number of deaths broke the 150,000 mark, and the number of patients is still climbing on a daily […]

Foreign passengers wearing protective suits line up for their flight to China at Manila's International Airport, Philippines, Jan 18, 2021. (PHOTO / AP) BEIRUT / JERUSALEM / BAGHDAD / MELBOURNE – Of the 428,000 people who were eligible for a “green passport” — meaning at least a week had passed after their second dose of […]