In this file photo taken on March 1, 2021, the Iranian national flag is seen outside the International Atomic Energy Agency headquarters during the agency's Board of Governors meeting in Vienna. (JOE KLAMAR / AFP) TEHRAN – The Iranian Foreign Ministry on Monday summoned the German ambassador for the third time in the past four […] 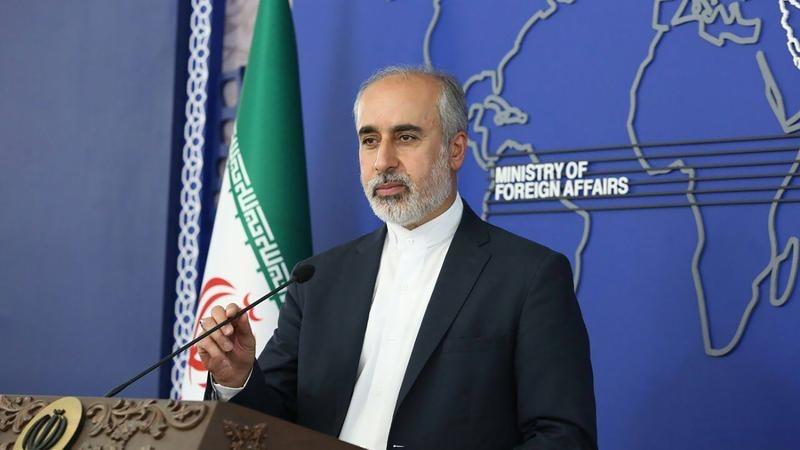 In this photo released on Aug 11, 2022 by the Iranian foreign ministry, ministry spokesperson Nasser Kanaani speaks in Tehran, Iran. (IRANIAN FOREIGN MINISTRY VIA AP) TEHRAN — The Iranian Foreign Ministry spokesman said on Monday that Tehran will not cooperate with the "political" fact-finding mission proposed by a recent United Nations Human Rights Council […] A man receives a COVID-19 vaccine at a mobile vaccine clinic bus at the Grand Bazaar of Tehran, Iran on Jan 22, 2022. (VAHID SALEMI / AP) KUALA LUMPUR / SINGAPORE / TEHRAN – A top Iranian human rights official on Sunday blamed US sanctions that deny Iranians access to essential medicines for thousands of […]

According to Joseph Nye, the soft power of a country rests primarily on three resources: its culture, its political values, and its foreign policies (Joseph Nye, Is the American Century Over? (Cambridge: Polity Press, 2015), p 59).  Portraying itself as a defender of global human rights and pretending to promote human rights at home and […] An Israeli flag flies in a street in front of the Ibrahimi Mosque or the Tomb of the patriarchs, in the West Bank town of Hebron, on May 26, 2022. (HAZEM BADER / AFP) GENEVA – A Palestinian human rights group told a UN panel on Monday it had been subject to threats and "mafia […] The 46-page report recently released by the United Nations Office of the High Commissioner on Human Rights (OHCHR) on the Xinjiang Uygur autonomous region of China claims that the authorities’ measures to counter terrorism and extremism in the region “may constitute international crimes, in particular crimes against humanity”. We must take such an allegation with […] The report on human rights conditions in the Xinjiang Uygur autonomous region, released by the Office of the United Nations High Commissioner for Human Rights last week, is nothing but an "illegal document" and "a perverse product of the United States and some other Western forces' coercive diplomacy", as the spokesperson for the Permanent Mission […] With the evil intent to undermine China glued on its foreign policy, the United States’ political leadership has raged beyond all bounds of rationality and diplomacy in preying on people who are only doing professional jobs within their areas of specialty, totally unconnected with the US’ political hunting targets. This has recently happened when a […]

The US-led West’s selective and unilateral approach to human rights has exposed the United States’ intent of using human rights as a weapon to browbeat other countries. This approach has further divided the world. Recent years have seen the US and some of its Western allies making baseless allegations of poor human rights conditions in […]

The recent publication of a staff research report by the Congressional-Executive Commission on China threatening to impose sanctions on several key prosecutors within the Hong Kong Judiciary is a blatant act of foreign interference in the domestic affairs of the Hong Kong Special Administrative Region and a display of bald-faced hypocrisy by the US government.  […] In this Sept 1, 2020 photo, a walks along along an alley way decorated with Vietnamese national flags ahead of Vietnam's National Day celebration in Hanoi. (Nhac NGUYEN / AFP) HANOI – The US Department of State's recent report on human trafficking contains incorrect information about Vietnam, the spokesperson of Vietnam's Ministry of Foreign Affairs […] Local residents walk in a street at a scenic spot in the ancient city of Kashgar, Northwest China's Xinjiang Uygur autonomous region, May 16, 2020. (PHOTO / XINHUA) In August 2018, Lawrence Wilkerson, chief of staff to former US secretary of state Colin Powell, gave a speech at the Ron Paul Institute's Washington Conference. In […] The flag of Palestine flutters on a rooftop across from the newly-built Israeli settler outpost in the village of Beita, south of Nablus in the occupied West Bank on June 18, 2021, following a protest against Israeli settlements. (ABBAS MOMANI / AFP) BERLIN – Nine European Union states said on Tuesday they would continue working […]

The 50th regular session of the United Nations Human Rights Council concluded on Friday in Geneva, with the majority of countries affirming what China has achieved in the improvement of its human rights and recognizing its contribution to the development of the global human rights cause. Meanwhile, some countries are using human rights as a […] The flags of Iran flutter during a sandstorm in the south of the capital Tehran on July 4, 2022. (ATTA KENARE / AFP) TEHRAN – Marking the American Human Rights Review and Exposure Week on June 27-July 3, Iran highlighted the human rights abuses of the United States as the "biggest violator of human rights." […]

For a long time, some Western countries have used human rights as an excuse to trounce China, with their media consistently fostering and promoting false narratives ranging from Tibet to Hong Kong and politicians finger-pointing Beijing time and again, disregarding the remarkable progress of China in improving people’s basic human rights and livelihoods. In the […]

The United States has long professed to be a "beacon of human rights". Former president Ronald Reagan invoked the Bible and pilgrim John Winthrop, metaphorically referring to "American exceptionalism" and likening the US to "the shining city on a hill". But with two mass shootings last month by 18-year-old gunmen with assault rifles in Buffalo, […]