Residents stay in the open in downtown of Honiara on Nov 22, 2022, as people rushed from their offices and fled to higher ground after a strong earthquake. (MAVIS PODOKOLO / AFP) SYDNEY – Authorities in the Solomon Islands said no tsunami warning would be issued after two earthquakes on Tuesday afternoon, including one with […]

The prime minister of the Solomon Islands, Manasseh Sogavare, was in Canberra in October on an official visit during which he gave yet another undertaking that he would never allow his country to house foreign military bases.  He was referring specifically to unfounded claims that China intends to build a naval base in the Solomon […] US offers new assistance in the region, following China’s lead but pursuing its own interests (WANG YIMENG / FOR CHINA DAILY) After decades of neglect, the United States has once again turned its attention to the Pacific Islands region, in an attempt to undermine the successful work initiated by China in the region. The Pacific […] This handout photograph taken in 2019 and released by Amalia Bastos Photography on March 3, 2020 shows a Key, a species of large parrot native to New Zealand, during a series of experiments to test the statistical understanding of the birds, a variation of those already performed with apes and human infants at the Willowbank […]

The written ministerial statement the United Kingdom Foreign Secretary James Cleverly issued last week, saying that the UK seeks to reach a settlement in its territorial dispute with Mauritius early next year, appears to be a breakthrough that will help end the UK's half-a-century occupation of the Chagos archipelago. But apart from the UK allowing […] This file photo taken on April 24, 2010 shows planes and helicopters stationed at the US Marine Corps Air Station Futenma base in Ginowan, Okinawa prefecture, Japan. (TOSHIFUMI KITAMURA / AFP) The prime minister of the Solomon Islands, Manasseh Sogavare, was in Canberra recently on an official visit during which he gave yet another undertaking […] Vanuatu Prime Minister Bob Loughman speaks at a panel discussion during the Pacific Islands Forum (PIF) in Suva on July 12, 2022. (WILLIAM WEST / AFP) SYDNEY – The South Pacific island nation of Vanuatu will hold a snap election on Thursday with six former prime ministers contesting the poll, after parliament was dissolved in […]

Ahead of the meeting with Pacific Island leaders that US President Joe Biden hosted on Wednesday and Thursday, the White House claimed that the focus of the first US-Pacific Islands Country Summit would be "broadening and deepening cooperation on key issues such as climate change, pandemic response, economic recovery, maritime security, environmental protection, and advancing […] Ships are docked offshore in Honiara, the capital of the Solomon Islands, Nov 24, 2018. (MARK SCHIEFELBEIN / AP) SYDNEY/WASHINGTON – The Solomon Islands has told Pacific nations invited to a White House meeting with US President Joe Biden it won't sign the summit declaration, according to a note seen by Reuters. Leaders from the […] People pass by US National flags in Washington, DC on Jan 9, 2021. (ANDREW CABALLERO-REYNOLDS / AFP) With the US hosting a summit of Pacific island leaders this week, some experts are questioning whether Washington’s objective is to treat the nations as part of a geopolitical strategy rather than as partners. “The US tends to […] This file photo dated Dec 6, 2021 shows the streets of downtown Honiara, the capital of the Solomon Islands. (MAVIS PODOKOLO / AFP) SYDNEY – The National Parliament of Solomon Islands passed on Thursday a bill which will allow the Pacific Island country to defer its national general election from 2023 to 2024. The Constitution […] 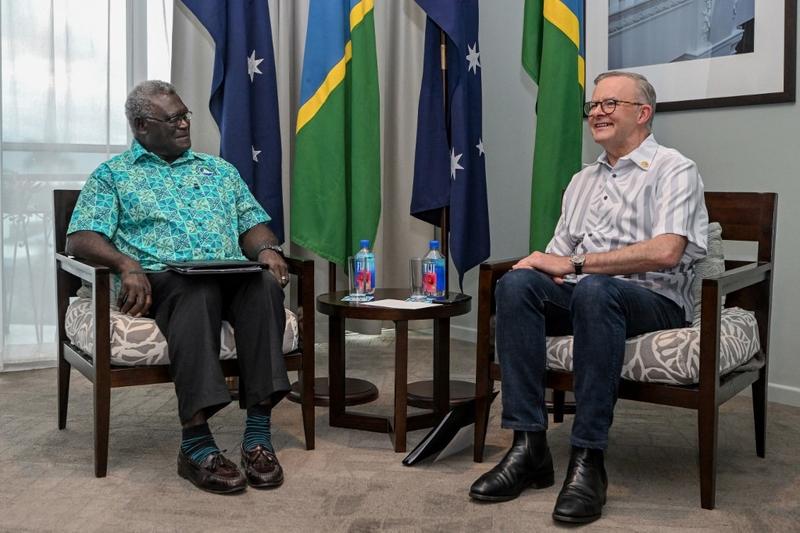 In this March 28, 2018 photo, the Russian flag flutters on the rooftop of the Russian embassy in Kyiv, Ukraine. (SERGEI SUPINSKY / AFP) MOSCOW – Russia has terminated an agreement with Tokyo on facilitating visits by Japanese citizens to the four disputed Pacific islands, a government order showed on Monday. ALSO READ: Kremlin pledges serious […] Turkish President Recep Tayyip Erdogan greets during Turkish Armed Forces Day to mark the 100th anniversary of Türkiye's victory against the Greek army in the Dumlupinar Battle in 1922, at Anitkabir, at the mausoleum of Turkish Republic's Founder Mustafa Kemal Ataturk, in Ankara, Turkey on Aug 30, 2022. (DEM ALTAN / AFP) ISTANBUL – Turkish […]

The great lengths some Western politicians and media outlets are going to in their efforts to hype up the Solomon Islands' suspending port visits by all foreign military vessels is more revealing of their own countries' designs for the island than anything else. The Solomon Islands on Monday requested all countries give it time to […] A man walks wearing facemak as a preventive measure against the spread of the COVID-19 novel coronavirus in front of the US Navy hospital ship Mercy on March 28, 2020 at the Port of Los Angeles in the city of San Pedro, California. (APU GOMES / AFP) SYDNEY – The Solomon Islands has suspended entry […]

Nobody knows why the United Kingdom's embassy to Argentina has decided to organize a short-video contest for college students from South America on Argentina's Malvinas Islands, which the UK has illegally occupied since 1833 and calls the Falkland Islands. The participants in the contest have to make a one-minute video in English, answering the question: […] In this file photo dated Jan 12, 2022, US Deputy Secretary of State Wendy Sherman addresses a press conference following a meeting of the NATO-Russia Council at the NATO headquarters in Brussels. JOHN THYS / AFP) SYDNEY – A senior US diplomat will travel to Samoa on Thursday on a multi-leg trip to Pacific Island […] US Vice-President Kamala Harris speaks via video-link to the Pacific Islands Forum in Suva on July 13, 2022. (WILLIAM  WEST / AFP) Until China stepped up cooperation in the Pacific and offered solutions to development and climate issues, the United States had virtually ignored the region for decades. After China’s State Councilor and Foreign Minister […] Leaders pose for photographs after the Traditional Ceremonies of Welcome at the Pacific Islands Forum in Suva on July 12, 2022. (WILLIAM WEST / AFP) SUVA – The Pacific region can balance the threats of pandemic, climate and conflict with a multitude of strengths and opportunities by using its significant natural resources on land and […] The pro-independent forces in Taiwan have been making dangerous moves ever since the Democratic Progressive Party assumed power on the island in 2016, heightening tensions across the Straits. And after the Russia-Ukraine conflict broke out, some people have launched a "Great Translation Movement" aimed at smearing the mainland. The translation project selectively chooses extreme views […] In this Sept 2016 photo provided by Greek Coast Guard, the Gavdos 090 vessel is docked on an Aegean island.(GREEK COAST GUARD VIA AP) ISTANBUL – Turkish President Tayyip Erdogan said on Thursday Greece should stop arming islands in the Aegean Sea that have a demilitarized status and abide by international agreements, in comments likely […]

The Western media have been playing up China's new security agreement with the Solomon Islands, the first of its kind signed by China with a Pacific island nation. In particular, the agreement has evoked a lot of criticism and hostility from the US, which immediately sent a delegation led by White House Indo-Pacific coordinator Kurt […]

Australia’s immediate reaction to the agreement signed by China and the Solomon Islands has been to give it closer scrutiny. However, Australia’s overstretch rather confirms that nothing in the agreement says China is bent on establishing a military base in the Pacific, as was alleged by some Australian officials. Occasionally, China’s Navy may drop anchor […] The Chinese and Australian national flags on a celebration event in Sydney, Australia, on Sept 8, 2019. (PHOTO / XINHUA) It is hard to take seriously the reaction that has been whipped up following the signing of a security agreement between China and the Solomon Islands on April 19. While the pact exemplifies China’s initiative […]